The White Pine Weevil is considered the most destructive pest of eastern white pine in North America. This insect kills the terminal leader of Eastern White Pines. Colorado Blue Spruce, Norway Spruce, Serbian Spruce, Scotch and Austrian Pines may also be attacked. The White Pine Weevil prefers to attack trees exposed to direct sunlight. The leader in the tree eventually dies and leaves what looks like a brown “shepherd’s crook” in the top of the tree.

Adults spend the winter in the leaf debris under or near the host trees. Once the weather warms, the insect flies or crawls to the leader of the host. Most feeding is done within 10 inches of the terminal buds. From mid-April through early May, females mate and each deposits 1-5 eggs in the feeding wounds. After hatching in about 7 days, the heavily infested terminal is attacked by the larvae who feed side by side in a ring around the stem. The larvae reach maturity in mid to late July and pupate in the terminal. Adults emerge through the small holes in the base of the dead terminal lead usually during late July and August. By the time the adults emerge, the damage to the tree has already been completed. The White Pine Weevil has one generation per year.

The first symptom of a White Pine Weevil infestation is resin droplets on the terminal leader of the host plant as a result of the adult feeding and cutting egg-laying slits. Most damage is done by the larvae of this insect. They may be found under the bark of the infested terminals between May and July. They completely girdle the stem and cause the current year’s growth to wilt, droop and eventually die. One or more side branches may eventually bend upward to take over as the terminal leader. Infested trees are seldom killed but they may be permanently disfigured.

White Pine Weevil likes to attack eastern white pine when the trees are less than 20 feet in height. The infested leaders should be pruned out and burned before mid-July to help contain the population of this pest. Cut back all but one live, lateral shoot just below the damaged terminal. This should promote single-stem dominance on the affected tree. Application of a registered insecticide may be applied from late March through April when droplets of resin are first noticed on the terminal leader. Control by spraying is difficult. 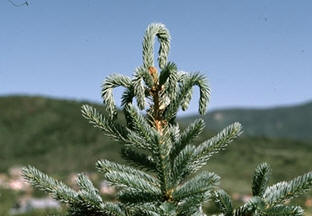 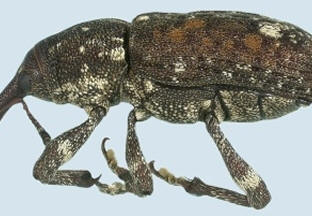 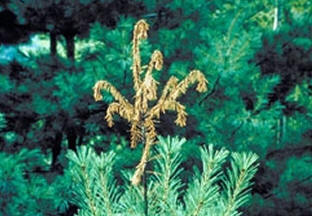