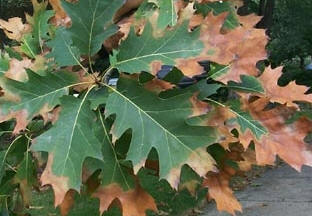 Bacterial Leaf Scorch is an infectious, chronic disease caused by the bacterium, Xylella fastidiosa. This bacteria is transmitted by insects which feed on the xylem tissue of the tree. The bacteria colonize and physically “clog” the tree’s water conducting tissues. . First diagnosed in the U.S. in the early 1980’s, this epidemic shows no signs of abating. Pin Oak and Red Oak are the most commonly affected species.

Infected trees exhibit leaf browning, bordered by a pale “halo” band separating the dead or scorched tissue from the green tissue. Symptoms recur each year and spread over the tree’s crown. Symptoms are most noticeable in the early fall. Infected trees will leaf-out normally the following year, however leaves on a few more branches will turn prematurely brown in late summer. This cycle repeats itself over a period of several years until the entire tree turns prematurely brown. Trees slowly die because of continual defoliation due to lack of nutrient transport. Diagnosis can be confirmed with a specialty laboratory test. 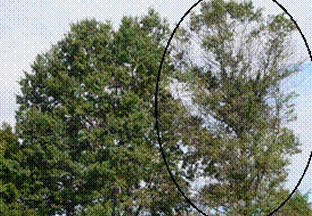 Bacterial Leaf Scorch is caused by the bacterium Xylella fastidiosa is spread by leafhoppers and treehopper insects. Water transport becomes disrupted in the roots, branches and leaves due to large amounts of multiplying bacteria and their by-products. The presence of the bacteria also triggers a reaction in the tree that plugs the xylem, further impeding water transport and eventually killing the tree. Symptoms seem to be worse on trees under stress, especially during the hot summer months.

No cure or therapy for infected trees nor a strategy for preventing infection is presently available. An antibiotic, oxytetracycline, has been shown to suppress symptoms, if injected annually. This treatment, however, is very expensive and is not a cure for the disease.