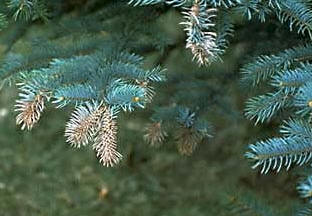 In the northeastern United States, the most important hosts of the Cooley Spruce Gall Adelgid are Colorado Blue Spruce and Douglas-Fir, which are grown as landscape ornamentals and as Christmas trees. They also will attack Engelmann Spruce, Sitka and Oriental Spruce.

The Cooley Spruce Gall Adelgid has a complicated life cycle which involves five biological forms of the insect, three of which occur on Spruce and two on Douglas-Fir. It requires at least two years to complete all five forms on both hosts. The pest can thrive on Douglas-Fir alone by continuous reproduction of the two forms with as many as five to six generations produced each year. However, it appears that those forms occurring on Spruce can not continue producing indefinitely and need to find the second host, Douglas-Fir, to complete the entire life cycle. On Spruce, Cooley Spruce Gall Adelgids overwinter as immature females at the base of terminal buds. Females resume feeding in the Spring, mature and lay several hundred eggs on the lateral terminals. Eggs hatch in 10-14 days into young nymphs which migrate to new growth and feed at the base of the needles. Their feeding causes a gall which soon surrounds them. The insects remain in the chambers inside gall tissue throughout the Summer. By mid-Summer, the galls brown, dry out and the Adelgids emerge from the opened chambers. Then they migrate to Douglas-Fir or remain on Spruce. On Douglas-Fir, the migrating females lay eggs on the needle tips and one generation of Woolly Adelgids is produced. The following Spring adults mature and produce winged and wingless females. The winged females return to the Spruce to start the cycle over while the wingless females remain on the Douglas-Fir and reproduce indefinitely.

On Spruce twigs, terminal galls are formed in response to feeding by the Adelgids and when infestations are heavy the resulting bud destruction destroys the shape of the tree. On Douglas-Fir, infested needles appear to be covered with snow. No galls are formed on Douglas-Fir, but feeding by the insects on the underside of the needle causes needle discoloration, needle distortion and premature needle drop.

Non-Chemical
Removing green colored galls during June or July before adult Adelgids emerge is practical for light infestations on a few trees. Be careful not to get any plant resin in your eyes.