Stigmina Needle Cast has become a significant problem for Blue Spruces in our region.  It is a fungus that effects the needles of Blue and  White Spruce as well as Norway Spruce, Oriental Spruce and Serbian Spruce.   It was identified in 1999 in North Carolina on Blue Spruce but previously only seen in Western Canada on Black and White Spruce.  Mild temperatures and wet weather favor disease development on emerging needles in early spring.

Symptoms appear as premature needle shedding, especially of older needles on the interior of branches in the lower canopy where shade and moisture are persistent.  Current season’s needles can also be affected but symptoms won’t appear until later in the season.  Stress by way of drought or insect infestation can predispose trees to infection.

Prune out dead or dying branches in the lower canopy of the Spruces and, if possible, removed discarded needles beneath the tree or cover with mulch.  Prune interior branches close to the main trunk that are declining.  Increase light and air flow when possible.  Fertilization can aid trees that have lost large volumes of needles and depleted their reserves.  Fungicide application may be helpful. 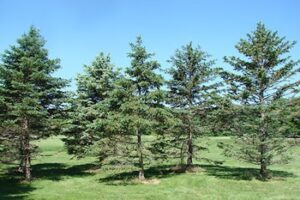