The Gypsy Moth was introduced to the United States in 1869 in an attempt to breed the insect for silk production. It spread from New England to Pennsylvania in the early to mid 1900’s and began defoliating forests. The Gypsy Moth can now be found as far west as Minnesota, with populations peaking every 5-10 years.

The Gypsy Moth has one generation per year. The egg masses are buff colored and are initially deposited in late summer on the trunks and limbs of trees. The size of the egg mass is indicitive of the population trend; egg masses around 1/2 inch long occur when populations are declining and contain approximately 100 eggs while masses 1 1/2 inches long indicate a growing population and can contain as many as 1000 eggs. Gypsy Moths survive winter in the egg stage and hatch from mid-April to mid-May in our area. The Caterpillars have 5 double rows of dark blue spots followed by six double rows of red spots on their backs. They also have a thin yellow stripe along the length of their back. Young caterpillars feed during the daylight and at nighttime, whereas older caterpillars feed only at night to avoid drying out or being eaten by predators. During the daytime, they rest under leaves and in bark crevices in the lower part of the tree. Mature caterpillars pupate from late June through mid July. Adult Gypsy Moths emerge about 2 weeks after pupating. Male moths are dark buff and fly readily during the day. Females are white with black markings, have large abdomens and do not fly.

Locating and destroying egg masses during the fall and winter is not feasible since many egg masses are hidden or impossible to reach. On a highly infested tree, it is not possible to destroy enough egg masses to have a substantial impact on the next year’s population.

Wrapping a trunk with burlap at chest height may help with a light to moderate infestation from late May through early June. The caterpillars feed at night and crawl down the trunk during the daytime and will collect under the burlap. Trapped caterpillars should be destroyed daily. Several insecticides are also registered for Gypsy Moth control. These materials can be applied by spraying from the ground, from the air by plane or helicopter and by trunk injection.

In recent years, a naturally occurring virus and a fungus disease have killed massive numbers of caterpillars in areas of high Gypsy Moth populations. Population collapses from these causes tend be much more effective than man’s attempts to keep this pest in check. 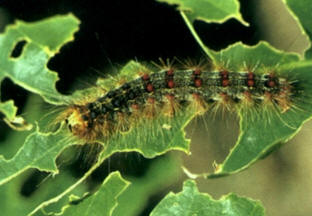 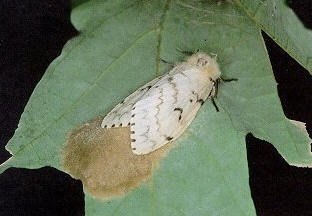 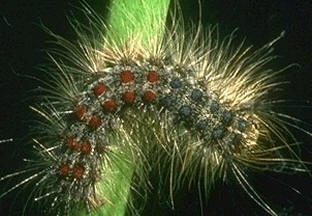