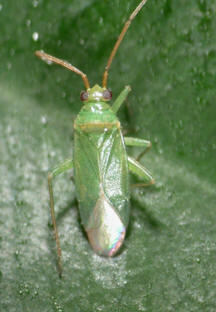 Adults are approximately 3/16″ long and are pale green. Nymphs are smaller but similar to the adults in color and have a distinct orange spot in the middle of the abdomen. They feed on the tender new growth of honeylocust and so closely resemble it in color that they may be hard to detect.

Eggs, which overwinter in woody tissue, begin to hatch about late April in Pennsylvania or at the time of bud break on honeylocust. Nymphs go through five stages and begin to mature into adults in late May. They are most abundant during early June and begin to decline in numbers in late June, and disappear by early July. There is only one generation per season.

Nymphs begin feeding just after bud break, or at the most susceptible period of the tree’s growth. Even when large numbers of nymphs are present, they are often overlooked by the nurseryman or homeowner because the bugs blend in with the color of the new shoots. Nymphs cause considerable discoloration and stunting of the new growth. This damage persists throughout the growing season and may be blamed on some other problem such as frost damage. In heavy infestations, a tree may be completely defoliated. Yellow-leaved varieties of honeylocust such as ‘Sunburst’ are more heavily attacked than native trees or green-leaved varieties such as ‘Shademaster’. 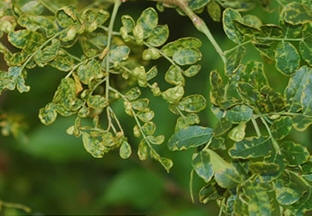