The Eastern Tent Caterpillar has been observed in the United States since 1646. Outbreaks often occur at 8-10 year intervals. This pest is easy to spot in the spring because of its conspicuous nests or tents built in the crotches of trees. Defoliation of trees, building of unsightly silken nests in trees, and wandering caterpillars crawling over plants, walkways, and roads cause this insect to be a pest in the late spring and early summer. Eastern tent caterpillar nests are commonly found on cherry, apple, and crabapple, but may be found on hawthorn, cherry, peach, pear and plum as well.

The Eastern Tent Caterpillar overwinters as a dark, shiny egg mass on twigs. Each mass can contain as many as 350 eggs. After hatching in the spring, larvae begin to construct their tents in nearby branch crotches. These tents serve as a protective covering for the larvae. The larvae feed for about 6-8 weeks before transforming into the pupa stage within the tent. The adult moths emerge 3 weeks later in late June or July and the females deposit their eggs in a mass around the small twigs. There is only one generation per year.

The silken tents made by the caterpillars can make a landscape quite unsightly and the wandering caterpillars can be a nuisance. The caterpillars do not feed within their tents, but wander within a few feet to eat leaves. They can weaken trees significantly with yearly defoliation. 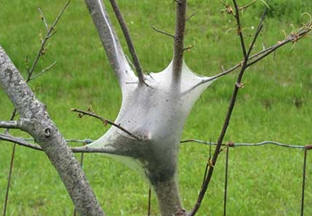 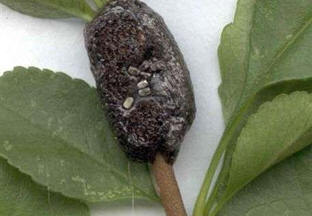 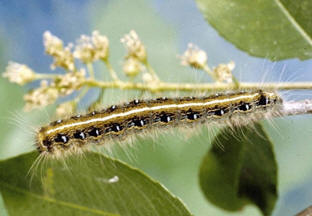