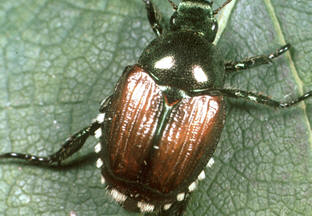 The Japanese Beetle causes extensive damage to trees, shrubs and flowers throughout the eastern United States. A native of Japan, it was found near Riverton New Jersey in 1916. In Pennsylvania, adults typically appear in late June and are most abundant during July and the first half of August. The Japanese Beetle is brilliantly colored, oval and less than ½ inch long. Wing colors are copper with fine lines that run the length of the wing cases. The body is a metallic green with 5 white tufts of white hairs projecting from under the wing covers on each side and 2 patches of white hairs at the tip of the abdomen.

The insect overwinters as white grubs in the soil. As spring approaches, the soil warms and the grubs move toward the soil surface and continue feeding on grass roots. The grubs are fully grown from late May through June and change to pupae in the soil. Adults emerge from the soil from June through July. After mating, females live 30-45 days and lay 40-60 eggs each, usually in the soil. Small, white grubs with brown heads and three pairs of legs hatch from the eggs within 10-12 days. The grubs feed on grass roots until late September when the cool temperatures force them down into the soil to overwinter. They complete their development the following spring 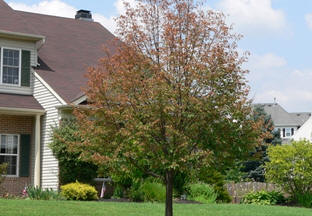 Japanese Beetles feed on more than 275 different host plants. Some of the more common ornamental plants include Linden, Purple Leaf Plum, Cherry and Birch. The adult beetles feed between the leaf veins, so the damaged leaf tissue takes on a skeletonized, lacy appearance. Continual defoliation leads to plant stress and eventual death.

A registered insecticide should be applied when beetles appear and before damage occurs. Repeat applications are often necessary.

Several traps using a floral lure and sex attractant are available. These traps are not recommended. In most urban areas, traps tend to attract more beetles into the area than would normally be present.

For professional assistance with tree and shrub problems contact a Keystone arborist.