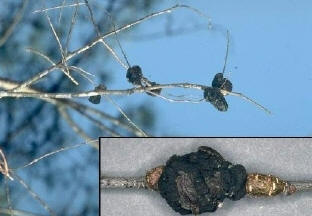 Black Knot is a common disease of Plum and Cherry. The disease is characterized by the presence of enlarged, black galls which may vary in size from ½ inch to more than 1 foot in length. Trees severely infected with Black Knot become an eyesore and are almost worthless as an ornamental plant after several years due to their unsightly appearance.

The disease is characterized by the presence of thick, black, irregular swellings on the twigs. It is usually first noticed in the winter season since the black growths are unobscured by leaves. It takes a keen observer to notice the subtle, initial symptoms that appear during the first season of infection. These symptoms are small, light brown swellings of the twigs. Eventually, the swellings turn olive green and have a velvety texture. Soon, elongated swollen areas appear on some older limbs. As the disease progresses, the knots become coal-black and very hard. Young, infected twigs may dieback during the first year of infection while larger branches may take several years to show signs of damage. The infection stresses the entire tree causing it to weaken, decline and possibly die. 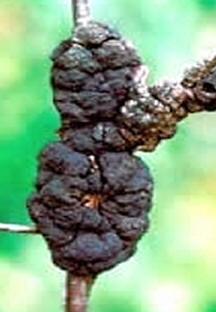 Black Knot is caused by a fungus. Infection may occur through wounds or through unwounded succulent twigs in early spring. The fungus lives in the “black knots” and produces spores that are discharged following a period of warm, wet weather and spread to other limbs where they germinate and produce new infections. Rainfall and temperature are the key factors in the release of spores. The duration of rainfall or wet period is not a factor. The spores are spread by wind and rain. New, succulent green shoots and wounded tissue are most susceptible to infection by the spores. It is usually not until the second summer after infection that the tell-tale black galls are visible.

A couple of things can be done to prevent infection or spread of Black Knot disease:

Fungicide applications are not recommended as they are cost-prohibitive and offer little hope in controlling the disease.