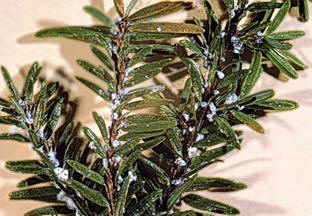 The most obvious evidence of a Hemlock Woolly Adelgid population is the copious masses of white filaments of wax produced by the females. These cottony masses normally persist throughout the season and into the following year, even after the insects are dead. The overwintering females are black, oval, soft-bodied and about 2 mm long. They are concealed under their characteristic white cottony mass. The overwintering adults commence laying eggs in large clusters in the cottony masses during warm weather in the late Winter and early Spring. They continue to lay eggs into June. The eggs are oblong and brownish-orange. The eggs start to hatch in early April and depending on Spring temperatures, most eggs are hatched by late June. The newly hatched nymphs or “crawlers” are reddish-brown with a small white fringe near the front. The settled “crawler” is black with a white fringe around the body and down the back. The developing young are dark reddish-brown. They continue to increase in size with active feeding. The adelgids become mature by late September and pass the winter on the trees as mature females.

Hemlock Woolly Adelgid populations usually are located on the stems and underside of the needles. Host plants are injured by the adelgids inserting their piercing/sucking mouthparts into the base of the needles or stem and removing plant fluids. Moderate Hemlock Woolly Adelgid populations may cause the trees to lose their vigor. Severe infestations may result in premature needle drop, reduced twig growth, dieback or death of the trees.

The most effective time to control Hemlock Woolly Adelgid (based on research studies) is late September to mid-October. Sprays applied during this period are directed against the overwintering females. A late-June spray may help reduce the number of developing nymphs. Also, an early Spring spray may help reduce the infestations before adults start laying eggs (providing Spring temperatures are adequate for the insecticide to be effective). Formulations of Horticultural Spray Oil, imidicloprid, Insecticidal Soap Spray and several other insecticides are labeled for Hemlock Woolly Adelgid control.