The Ambrosia Beetle came by way of China and has been in the US since 1974.  It prefers a wide variety of hosts including Azalea, Bradford Pear, Chinese Elm, Dogwood, Fig, Golden Rain Tree, Magnolia, Cherry Plum, Redbud, Red Maple, Styrax and Sweetgum.  The adult female beetles are 2.1-2.9 mm long and are dark reddish brown.  Males are much smaller (1.5 mm)  and shaped differently than females.

Females bore into twigs, branches or small trunks of host plants and push the frass out of the galleries in a typical toothpick formation.  The beetles inoculate the inside of the galleries with ambrosia fungus which the brood feeds on.  The hundreds of holes in the trunk and twigs along with the tunneling under the bark weakens the tree and leaves it susceptible to problems.

Controlling this insect is difficult but possible.  Contact us if you think you have this problem. 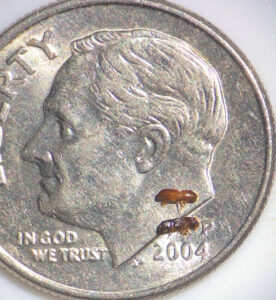