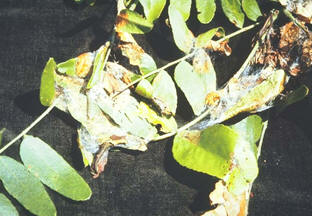 Mimosa Webworm is an insect native to China and Japan and was accidentally introduced into the U.S. during the 20th century. The caterpillars were first detected in Washington D.C. in 1940 attacking mimosa trees. Today the moth is common in many states and is a major pest of mimosa and honeylocust.  Despite its name, Mimosa Webworm is found more commonly on honeylocust than on mimosa in Pennsylvania. The moths are small, with a wing expanse of about one-half inch. The forewings are grayish with small black dots; the grayish hind wings lack the dots. The caterpillars are brownish with five longitudinal whitish stripes and slightly more than a half-inch long when mature.

Adults emerge in early June from pupae that overwinter in the ground or in crevices on the host tree, and they oviposit on flowers and foliage. Newly hatched caterpillars feed together in the foliage they web, and later they move to the tender terminal leaves and feed, continuing to web the foliage. Larvae feed on the undersides of the leaflets, leaving the upper surface intact. The caterpillars complete feeding about mid-July and pupate in the ground or in the webbed foliage. Adults of the second generation emerge in about two weeks, and the cycle is repeated, requiring about four weeks.

Attacked leaflets turn brown and detract from the trees’ appearance causing an unsightly condition. Heavily infested trees appear dull gray to brown and undoubtedly are stressed to some extent. The stress factor may be increased if the trees were heavily attacked by honeylocust plant bug, the major early-season pest of honeylocust in Pennsylvania. Activity on honeylocust begins about the time the plant bug has completed it’s feeding and egg-laying on the tree.