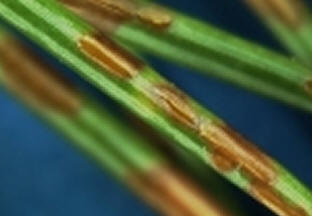 Rhabdocline Needlecast is a fungus that affects only Douglas Fir. Since Douglas Fir is commonly sold for use as a Christmas tree, the fungus has the ability to plague nurseries which grow these trees for holiday sale. The fungus can turn a healthy Fir into a sickly-looking tree, often convincing the homeowner that it has died.

Symptoms of the disease can be spotted in early May. Discoloration of the needles begins near the base of the tree first. Infected needles will have one or more yellow spots which then turn purplish-brown and are apparent on both the top and bottom surface of the needle. The previous years needles are infected. Eventually, the older needles fall off in the spring and summer, leaving the trees with only one year’s worth of growth.

Just before budbreak, the infected spots on the needle swell and split open in preparation for release of the infectious spores. Once the fruiting bodies rupture, orange spore-bearing tissue will protrude from the undersurface of the needle during damp conditions. When the tissue turns black, spore production and release is complete.

Two to three fungicide applications are generally recommended. The first should be made close to budbreak or when the new growth is no longer than ½ inch long. Repeat applications should be made at 2-3 week intervals after the first application. To help control spread, keep good air flow between trees and keep weeds low to allow for good air circulation. The fungus favors damp conditions.