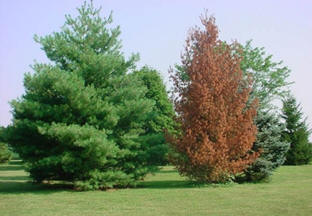 Procera Root Disease is also known as Procera Root Rot and White Pine Root Decline. It is caused by the fungus Leptographium procerum and infects the inner bark and sapwood of the roots and lower trunk of white pine. Although it is most common on white pine, it can also kill Scots and Austrian pines. The disease is more prevalent on trees planted in wet areas. This problem has become more prevalent and problematic in Pennsylvania over the last several years, prompting many landscapers to reduce or discontinue planting white pines.

In the spring, trees 3-15 years old which have been infected for several years, show delayed bud break and reduced candle length. Mature needles then fade, droop and turn brown and the infected tree stands out among healthy, green pines. Affected, mature white pines may die from the top down, one whorl at a time. Older and younger trees alike may also turn yellow and lose some needles before turning brown uniformly. Some trees may die within a year after symptoms appear. Others may linger for several years, with mortality occurring apparently at random, and 1 to 3 percent of the affected trees dying annually. A chocolate-brown canker may occur under the bark around the root collar.

There are no fruiting bodies associated with this fungus that can be seen with the unaided eye. However, the fungus can be readily identified when grown in pure cultures and observed under the microscope. Although the fungus does not survive well in the soil, it may be spread by contaminated insects as they emerge from diseased trees and feed on healthy trees nearby. Trees planted on wet sites often seem to be more susceptible to the fungus; however, a wet site is not essential for this disease to occur.

Controls are intended to reduce disease spread by insect vectors. Avoid planting eastern white pine on wet sites, and do not replant eastern white pine among the stumps of recently killed trees. Remove and destroy infected trees including stumps, if possible.