Emerald Ash Borer has been Detected in Bucks County!

On March 14th, 2012, the PA Department of Agriculture confirmed that Emerald Ash Borer had been detected in Warrington, Bucks County. Since then, many more cases have been confirmed in our area. This insect has killed over 50 million Ash trees since it’s original detection in Michigan in 2002. Fifteen states and 2 Canadian provinces are infested. In Pennsylvania, EAB has been moving east since the original detection in 2007. Below you will find detailed information on the insect. Please call our office if you would like an evaluation of your property.

Other helpful links for information:

This beetle, originally from Asia, was discovered in July 2002 feeding on Ash trees in Southeastern Michigan. Larvae feed in the cambium layer of the tree (between the bark and the wood) and produce galleries that eventually girdle and kill the tree by disrupting the nutrient and water conducting tissues. Emerald Ash Borer has spread into Ohio, Illinois, Indiana, Maryland, West Virginia and Pennsylvania. Over 50 million Ash trees have been killed. In June 2007, EAB was found in western PA, near Pittsburgh and continued spread has occured in PA. Emerald Ash Borers were detected in June 2008 in a county adjacent to the original PA discovery. Adult beetles are slender, elongate and small (.3 to .5 inches long). Adults are usually bronze or golden green with darker, metallic, emerald green wing covers. Larvae are white to cream-colored and flat. The head is brown and is usually retracted into the prothorax and only mouthparts are visible. The abdomen has 10 segments and has a pair of brown, pincer-like appendages on the last segment.

Eggs are laid between layers of bark and in bark crevices. The larvae hatch after approximately 1 week and bore into the tree where feeding begins on the inner bark and phloem. The larval feeding creates “S-like” galleries under the bark. The larvae go through 3 feeding stages before settling into a prepupal state for the winter. Pupation takes place in the late spring and adults begin to emerge through “D-shaped” exit holes in May and early June. The adults remain active until the end of the summer.

The Emerald Ash Borer attacks all species of Ash. Ash trees are recognizable from the compound leaves which are arranged opposite of one another on the branch. Damage from the insect is difficult to detect in newly infested trees. Jagged holes created by woodpeckers feeding on the pre-pupal larvae may be an initial sign of a problem with EAB. After one year of infestation, the D-shaped exit holes left by the emerging adult beetles will be present on the branches and the trunk. When the bark is removed from infested trees, the excrement-filled larval tunnels are readily visible. These excavated tunnels disrupt the transport of nutrients and water within the tree during the summer and cause the foliage to wilt and the tree canopy will become increasingly sparse as branches die. Epicormic shoots may also develop on the trunk of the tree. Many trees lose 30-50% of their canopy after only 2 years of infestation and usually die within 3-4 years of infestation.

Preventative measures may be undertaken for specimen or particularly valuable Ash trees. Imidicloprid has been shown to help protect Ashes from this devastating insect.

For professional assistance with tree and shrub problems contact a Keystone arborist. 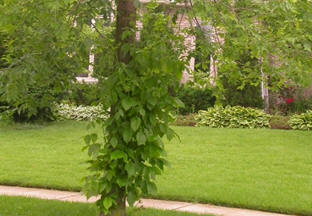 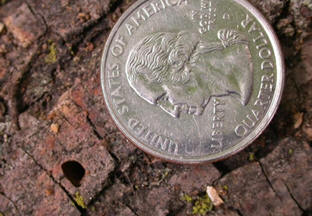 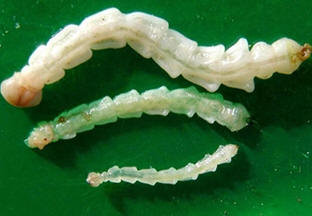 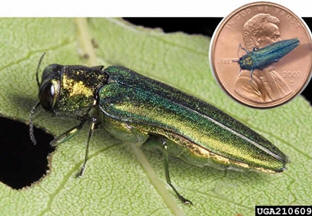