Peach Tree Borers feed under the bark of Peach trees and are a serious pest in commercial peach orchards. They also attack Plums and Cherry trees in the residential landscape and can weaken and eventually kill these trees by girdling the trunks under the bark.

The adults are clear-winged, day-flying moths which are often mistaken for wasps. The female is steel blue with an orange band on the fourth and sometimes fifth abdominal segment. The forewings are opaque and covered with blue scales. The male is smaller with clear wings and a blue abdomen with 3-4 narrow yellow stripes. Peachtree Borer eggs are oval, reddish-brown and are deposited singly or in small groups on the trunk. Eggs hatch in mid-July and the larvae immediately start burrowing into the bark. The larvae feed on the cambium or growing tissue and tunnel between the inner bark and sapwood. The larvae commonly attack the trunk between 10 inches above ground to 3 inches below ground. The insect overwinters as a larvae beneath the bark. Feeding resumes in April or May and the mature larvae enter the soil to pupate. The adults emerge in mid-June.

Injury is caused by the larvae feeding on the cambium and inner bark of the trunk, close to the soil level. Large roots are occasionally attacked as well. Active feeding areas often have masses of “gum” mixed with frass, exuding from the bark. Young trees are sometimes completely girdled and die. Older trees are often severely injured and weakened, leaving them open to attack by other diseases or insects.

The Peachtree Borer can be controlled by thorough, well-timed insecticide application. Pheromone traps can be used to help time these sprays. Trunk application is also sometimes helpful to target larvae between July 20 and August 1. Systemic insecticide (imidicloprid) may also be used to limit the insect activity. 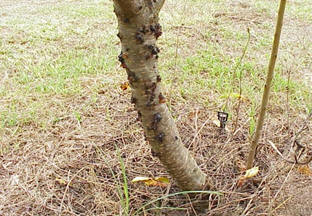 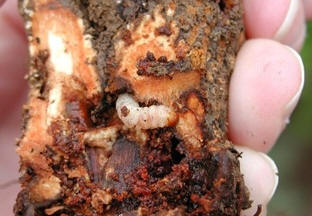 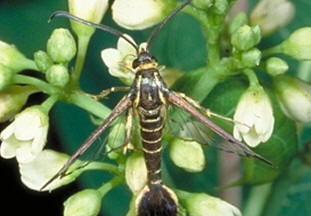